Until 1830 Mohéli was part of the Ndzuwenie Sultanate which also controlled Anjouan, a neighbouring island. In 1830 migrants from Madagascar led by Ramanetaka, who later changed his name to Abderemane, took over the island and established the sultanate of Mwali. In 1886 France made the island a protectorate. Until 1889 Mwali had its own French resident, but the island was then subjugated to the residency of Anjouan. The sultanate was crushed in 1909 when the French annexed the island. French colonial stamps inscribed Mohéli were issued from 1906 to 1912.

In 1975, Mohéli agreed to join the Comoros nation, along with Grande Comore and Anjouan. Political, economic and social turmoil affected Mohéli and the Comoros in general. On 11 August 1997, Mohéli seceded from the Comoros, just a week after Anjouan had done so. Mohéli's nationalist leaders were Said Mohamed Soefu who became President, and Soidri Ahmed, who became Prime Minister. Mohéli quietly rejoined Comoros in 1998. In 2002, Mohéli ratified the new Comorian Constitution and new Constitution of the Autonomous Island of Mwali (Mohéli) - March 10, 2002, which provided for a less centralized federal government and more power to the island governments. It helped settle continuing political turmoil on Comoros and continuing secessionism on Anjouan. Also in 2002, Mohamed Said Fazul was elected President. His supporters won most seats in Mohéli's delegation to Parliament in the legislative elections of 2004.

His Excellence Monsieur AZALI ASSOUMANI President of Comoros Union was elected on May 26, 2019 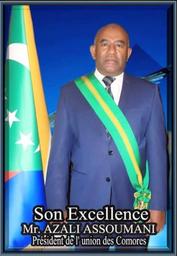